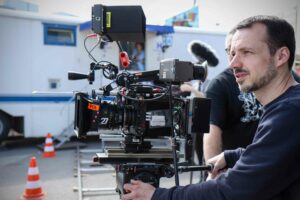 Sören Schulz, born in Northern Germany in 1975, worked as a projectionist and theater manager in the local cinema

during his school days and wrote film critiques for a local weekly newspaper. After his civilian service, he attended the

Foundation Course at the Panico Film School in London. Since 1998 he has been living in Berlin, where he first worked

as an electrician and camera assistant, later as a cinematographer, assistant director and director.